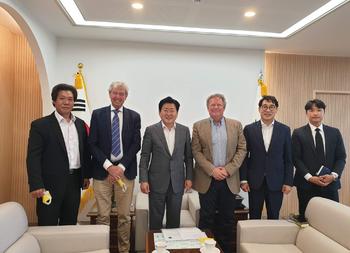 In 1653 Mr. Hendrick Hamel stranded with his VOC-ship ‘Sperwer’ on Jeju Island. He was taken prisoner and worked 13 years for the Korean king before he could escape to Decima, the first Dutch trading post in Japan. Mr. Hamel wrote a book about his time in Korea, about the Korean people and the beauty of Jeju Island. Centuries later this book was rediscovered in the archives of the VOC, the former Dutch Trading Company in Amsterdam.
Dutch people have always been navigating around and exploring the world. They also have a long yachting history. On his restoration to the English throne in 1660, the city of Amsterdam presented a 20-metre pleasure yacht to King Charles II. Many years later the first yacht club was established. Now there is a Hamel Museum and a replica of the Sperwer in Jeju and a Hamel Museum in Gorinchem in the Netherlands, the city where Hendrick Hamel was born. Both are very worth visiting!

After many projects along the entire Chinese coast, for us Korea was a new and surprising “re-discovery”. Spread over Jeju are about 700 pleasure yachts in over 100 (small) ports. Sport fishing, dolphin watching, and diving are popular. Yachting is still in its infancy. The island is a (geological) UNESCO World Heritage site with beautiful beaches and 20 golf courses. The SWOT-analysis is clear, some major changes are necessary, but Jeju Island can become a new yachting and marine tourism destination.