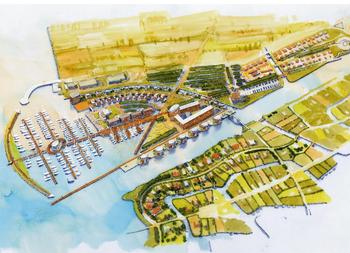 Bordered by the East China Sea, surrounded by a series of lakes in the west, and criss-crossed by rivers and canals, Shanghai is ideally situated to connect its metropolitan image with recreational-leisure uses of water and make Shanghai a major waterfront metropolis in East Asia. Opportunities for yachting development in the entire province were assessed. The Shanghai Yachting Industry Master Development Plan covers a global overview of the yachting industry, an analysis of opportunities for Shanghai, potential routing networks, the design of major urban nodes, as well as an implementation plan with clearly indicated phasing which considers the region's future development along with its coastal and delta ecology. The Master Development Plan identifies five different Water Districts in the Shanghai Delta Area, based on detailed studies of Shanghai's differentiated water structure, and provides detailed design plans for each development area. This project was undertaken in cooperation with DHV Environment and Infrastructure (now Royal HaskoningDHV), WA Yachting Consultants, KuiperCompagnons, Ecorys, the Port of Rotterdam, the DHV Shanghai Representative Office and the Tongji Urban Planning and Design Institute of Shanghai.

The study resulted in a range of recommendations, including suggestions for practical rules and regulations. Since 2003, WA has completed a dozen yachting projects and master plans along the Chinese coast, from Dalian to Shenzhen, including a recent Yachting Development Plan for Xiamen in 2014, all together with our long-time partner Royal HaskoningDHV.