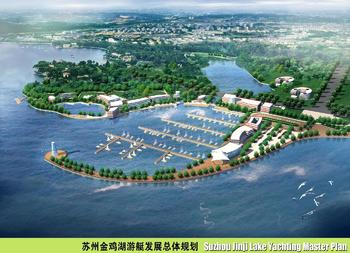 The Dongxing Yacht Club along Dianshan Lake was the first marina in Shanghai, set up in 1993. Using the facilities of the Donxing International Yacht Club, the Shanghai Boat and Yacht Club (SBYC) was established in 2001 by a small group of foreign businessmen working in Shanghai, who have affection with sailing as a sport. Mercury Marina along Tai Lake was built in 1998 as a full service marina for Mercury Marine, a USA based company. These three developments can be regarded as the basis of yachting development in Shanghai and the lake district around it. Suzhou is in the heart of this lake district between Shanghai and Lake Taihu and many international companies are based in its industrial park. This brought opportunities for Jinji Lake as the lake became the new waterfront of extensive residential developments in Suzhou.

Jinji Lake has an area of 7km2 and after it had been excavated a depth of 3 – 3.5 meter. The Master Plan includes a site plan, functional layout and transportation analysis for two marinas, locations for mooring facilities, some in combination with hotels, and different facilities for water recreation and leisure. The plan includes a zoning plan.