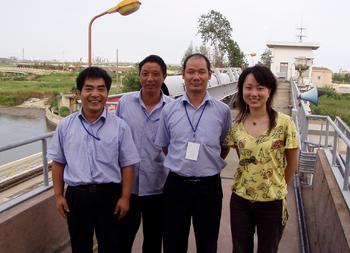 In 2006, several important developments were underway in Fengxian. A new yachting industrial area for the yacht building industry was planned in the south end of Jinhui River including a connection to Hangzhou Bay. In Jinhui Town there were plans for a new waterfront including a marina. Nearby, in Nanqiao, there were plans for a resort and waterfront including water sports facilities. At the Hanzhou Bay side of the Jinhui River is the Bihai Jinsha Amusement park, an important beach for Shanghai residents in the centre of 3 large enclosed water basins. The most western basin was already used for water sports -- jet skiing, sailing, canoeing, water bicycling, etc. So the stage was set for Fengxian to become an important centre for water sports.

Our vision
Because of intensive commercial shipping on Jinhui River, we suggested using the canals around and next to Jinhui Town for yachting and day trips. Those canals were not being used by boats at the time, only for fishing. Almost every canal, river or lake in China is used by cargo vessels transporting goods or by fishermen. For yachting you need some extra space and preferably clean water.

The third basin next to the Bihai Jinsha Park had clean water and was already used for different kinds of waters sports. There was enough space for more yachting activities. It was enclosed, not tidal, and therefore safe, which is also important in China.

Though it is difficult to force yacht builders to concentrate in a specific area, China is different, so we hoped the plan works. If it happens, the southern lock of Jinhui River could be upgraded and allow yachts to pass to the sea and back (trials, export, maintenance and service). When realized, the third basin and the projected new marina could be connected to the outgoing canal and from there to Hangzhou Bay by a lock as shown above.

All these ideas were included in the Fengxian Yachting Industry Master Development Plan in September 2006. If you search ‘Fengxian yachting’ in Google, you end up with our 2006 plans, so has nothing happened since? If you try Fengxian on Google Earth, you can see developments since 2006. If someone can give us an update of the situation in Fengxian we would appreciate that and publish it.

Update
In 2016 we welcomed a delegation from Shaoxing in our Waterfronts NL office in Lelystad. Visitors from the Pearl River Delta (PRD) are announced. It is not easy in China, that is why we are there (since 2003).